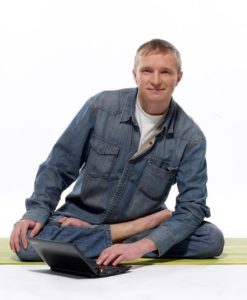 Vadim Zaporojtsev was born in 1970 in the North Caucasus (Russian, Cossack). He has two higher educations – a Degree in Physics and an MBA (Master of Business Administration).

Vadim has worked in research institutes of the Russian Academy of Sciences, then in the field of business consulting in the largest foreign and Russian companies.

He has been practicing yoga since 1984. Received the transfer of the yoga doctrine (initiation into the Anandasvami tradition of yoga) and has been teaching yoga combining it with running the business since 1995. Since 2000 he has completely switched over to teaching yoga and training of future yoga teachers and instructors.

One of the co-founders of the Happyoga center.

The founder of the International Open Yoga University.

Vadim has translated the following texts on yoga: “A Treatise on Hatha Yoga”, “A Treatise on Kriya Yoga” and as well as texts on Nyasa Yoga, Yantra Yoga and Yoga of Amorousness.

Vadim Zaporojtsev issued comments on “Yoga sutras of Patanjali”, comments on Anandalahari as well as on the text “108 aphorisms of Tantra yoga” in 2003.

He conducts yoga seminars in towns of Siberia and European part of Russia, and also in the neighbour countries.

He has been permanently working in the Cultural Center “Prosvetlenie” since 2007.

Natalie Ananda Friends, I am Natalie Ananda - Chief curator of the site. Everything is very friendly and open here! Come to class. We have 33,100 yogis and yoginis from 40 countries of the world, 38 types of yoga, 50 Internet yoga courses, hundreds of hours of video! On the Open Yoga.Ru website you will learn yoga from scratch at the highest and most serious level. There is also a Free Online Internet Yoga Courses - Self-Study Guide of Open Yoga, Russian-language version of Internet yoga courses, International Open Yoga University. Here you will find friends and like-minded people! Video about us here ... Friends, write to me at openyogakurs@yandex.ru for all questions.